On the outside, it looks pretty much like all other snow groomers. It has a fierce-looking blade up front, a cab in the middle, and a corduroy-making tiller behind. What's “under the hood” makes the green groomer special.

The PistenBully 600 E+ is on the forefront of environmental kindness. It uses 20% less fuel and its carbon emissions are reduced by 20%. In addition, there's a major reduction in particles released. And it's also quieter.

Those are major factors because grooming operations go on all night, every night, all season long – manicuring the snow into fresh corduroy for skiers every morning.

The green groomer is called the E+ because it makes its own electricity. That electricity powers its work-horse equipment including its tank-like tracks and its huge corduroy-making tiller. It's a hybrid! It's the world's first diesel-electric snow groomer.

Alta got one of the very first PistenBully 600 E+ in the country, and only a handful of resorts have one. “The 600 E+ is a step towards the future just as we are seeing with electric cars,” said Buck Boley, Alta's Director of Equipment Operations. “It’s a great snowcat and we are happy to have one.”

Nitty gritty about the PistenBully 600 E+

Speed: 12 mph, continuously variable depending on the work it's doing

Torque: Its electric motors have full torque as soon as they start to turn at very low engine rpm.

Turning radius: On the spot

Cost: About the same as a large house. 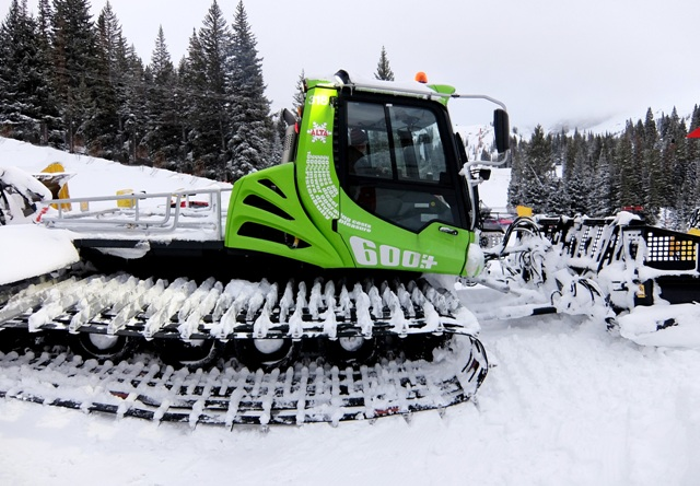